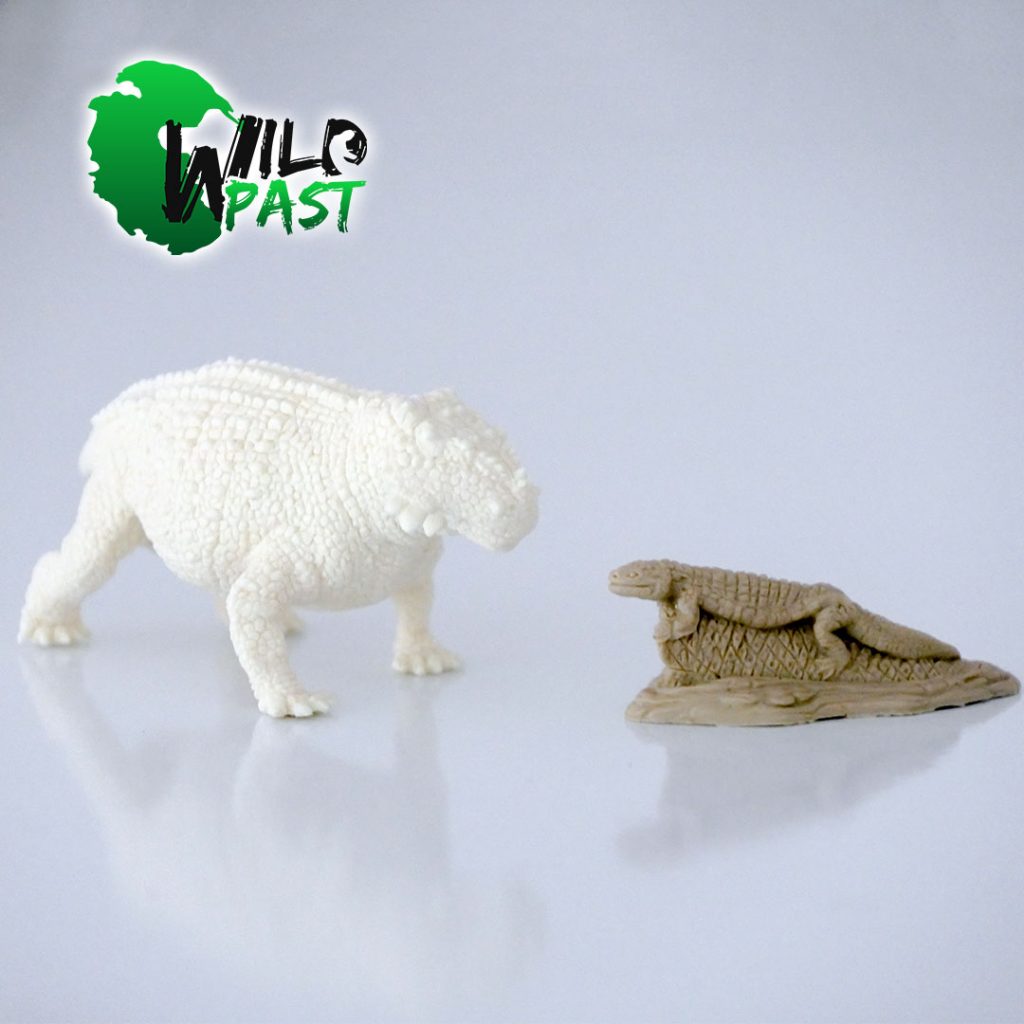 Pictures of the unpainted prototype

Scientific name:
Scutosaurus karpinskii (Shield Lizard)
Kotlassia prima (Derived from the city of Kotlas, near which the fossils were found)

Description:
Scutosaurus is a reptile of the Pareiasauridae family. Pareiasaurs lived before the dinosaurs during the Permian Age. At that time, the Pareiasaurs were the largest land creatures with lengths of up to 3 meters.
Scutosaurus had a broad, flat skull, a typical characteristic of Pareiasaurs. Its teeth distinguish it as a herbivore. The numerous horns in his face were probably used for courtship behavior among conspecifics.
Scutosaurus was massive and had short, thick legs, which is why it moved slowly. The body of Scutosaurus was encased in loose bone plates (osteoderms), which gave it its name “shield lizard”. This armor protected it from dangerous, faster predators such as the Gorgonopsids.
During the Permian Age, the continents were all formed into the supercontinent Pangea. At that time there was a semi-arid climate, which meant months of dry seasons. Although several specimens of Scutosaurus were found together, it is likely that the animals were solitary, in order to avoid each other because of food shortage.
Scutosaurus was first described in 1930 by Vladimir Prokhorovich Amalizki.

Kotlassia:
Like Scutosaurus, Kotlassia lived in late Permian Russia. Kotlassia was a reptilomorphic amphibian. This means that the animal had identifications of both reptiles and amphibians. Findings from other related animals show that the young animals hatched as larvae in water and developed there, like today’s frogs. What distinguishes Kotlassia are its scales, which are atypical for amphibians. Kotlassia probably belonged to an old line of reptile ancestors.
The first fossils of Kotlassia were found and described in 1898 by W.P. Amalizki, who also described the Scutosaurus.

About the figure:
The dry season is over and abundant water holes and rivers have formed everywhere. While looking for a drink of water, the Scutosaurus comes across a Kotlassia, which has just crawled out of the water to rest on a lepidodendron trunk.